Publication of “A Record of Atomic Bombing Experiences”

Publication of “A Record of Atomic Bombing Experiences” 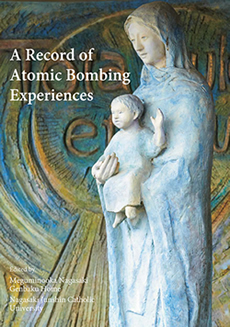 The long standing mission of Nagasaki Junshin Catholic University is inextricably linked to the devastating impact of the atomic bombing of August 9th, 1945.  On that day, some 214 members of the school who had been mobilized to work in a munitions factory perished. However, many of the students and sisters of the school had providentially moved out of the city to collect pine resin on Mitsuyama – a hilly area where the university now stands.  As they were collecting the resin, charred paper remains of their school register and pages of the bible began falling around them, indicating that some terrible calamity had occurred in town.  Had they not been on the mountain that day, they would surely have been killed along with their classmates and colleagues that day.

The deaths of the 214 weighed heavily on Sister Yasu Esumi, the first president of the school, as she felt she was responsible for the students’ welfare. She at first was resigned to the fate of closing the school, but the parents of the deceased students encouraged her to rebuild the school in memory of their loved ones. The words of these grieving parents stirred Sister Esumi and became the driving force behind her goal to produce graduates concerned with taking care of those suffering the ongoing effects of the bomb, and of doing their part to build a more peaceful society and world.

From the ashes of the bomb, Mitsuyama has come to be known as Megumi no Oka – Hill of Grace. The mission of providing care for those who need it most, and graduates equipped to build peace is now continued through the Nagasaki Genbaku Home and Nagasaki Junshin Catholic University respectively – located here on this Hill of Grace.

To further this mission, on May 13th, 2015, Nagasaki Junshin Catholic University concluded a Comprehensive Partnership Agreement with Nagasaki City in order to help us continue our efforts to contribute to the Nagasaki community by passing on the city’s heritage through Nagasaki Studies, providing welfare for the atomic bomb survivors, and acting as strong proponents for peace.

One of the projects that was born while we were searching for what we could do to contribute both to the community (as Nagasaki Junshin University is in Nagasaki) and also to peace, in partnership with the Nagasaki City, was to publish an English version of A Record of Atomic Bombing Experiences, which was written by residents of the Meguminooka Nagasaki Genbaku Home. The Mayor of Nagasaki, Mr. Tomihisa Taue, once commented to our students that they have the fortunate privilege of attending a campus at Megiminooka as they can listen to the fresh voices of the Hibakusha (Atomic Bomb victims) which are constant reminders of the need to reflect on peace. As part of the University’s duty at the 70th anniversary of the atomic bombing, to pass on knowledge of the realities of the atomic bomb, not only to our students but also to the world, and to ensure that the voices of atomic bomb victims’ prayers for peace are widely heard, we proposed publication an English version of A Record of Atomic Bombing Experiences, and the Nagasaki City Council recognized its significance and endorsed the project.